The Greek alphabet (looking back)

The Greek language is one of the most ancient languages and one that has taken many centuries to develop into its present-day form. The most commonly accepted theory about its origins suggests that the Greek alphabet came down from the Phoenician alphabet and this is suggested by the shapes, names, and arrangements of the letters. Using and adapting the Phoenician alphabet, many changes and modifications were made: these modifications of existing letters resulted in the creation of new and additional letters.

Nowadays, Greek is the official spoken language of Greece and of Cyprus and it is also a minority language spoken in parts of Italy, Albania, Romania, Armenia, and Ukraine. There are many different local dialects of the Greek language with a variety of pronunciations in different parts of Greece and Cyprus.

You can Book a trial lesson now with us or keep reading to find out more about the alphabet.

Here are some of the main features of the Greek alphabet:

Now let’s see the Greek letters one by one and see how each letter is  pronounced:

ΟΥ, ου u as in lubricant

Τhey sound as two letters together, ξ= k+s and Ψ=p+s

Now, I would like to introduce you a friend with a ‘’special name’’: μπανταγκ/γγατσουτζου! Weird isn’t it? Well, my friend’s name comes from the two letters consonants and a vowel so it is easier to pronounce:

Various letter combinations result in the production of a variety of different sounds.

Learn more about us and the Greek Alphabet!

Now it is time for our surprise challenge and to have a little fun with a quiz. 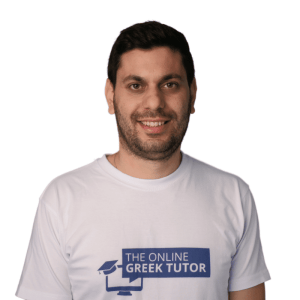 My name is Valentinos Filippou. I have been an online Greek tutor since 2014. I’ve been teaching one-on-one Skype lessons and making video lessons for my students so as to explain different aspects of the Greek language.

FAQs about The Greek Alphabet

6 thoughts on “The Greek alphabet”